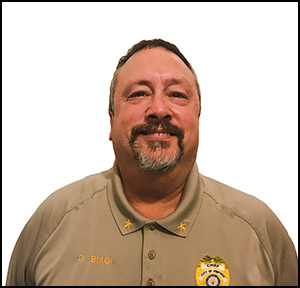 Chief Douglas Biagi was born and raised in Ventnor City, New Jersey. He attended Ventnor Public Schools and Atlantic City High School, graduating in 1983. At the age of 14, Doug was hired as a tennis court attendant and then as part of the summer beach cleaning crew. In 1986, he joined the ranks of the Ventnor City Fire Department as a Firefighter/EMT.

Biagi’s next promotion would occur in January of 2012 when he was promoted to Captain and was assigned as Operations Commander of the Patrol Division. In 2014, Captain Biagi was reassigned as the Administrative Captain and took over as the Departments Accreditation Manager for NJSACOP. During his time as Captain, Biagi was the department’s Acting Chief when Chief Miller was out of state or on vacation. In April of 2017, Douglas Biagi was made Acting Chief of Police, and on May 1,  2017, he was named the permanent Chief of the Ventnor City Police Department.

During his career, Biagi's path was primarily focused on Community Policing and bridging the gap between law enforcement and the citizens of Ventnor. Biagi is an anachronism of sorts, utilizing the old style beat cop persona. Biagi knows most residents in Ventnor, from its merchants to its children, and interacts with them regularly because of his strong roots with the community. Biagi has lived his entire life in Ventnor, raised his family in Ventnor and remains active in the community by volunteering with many committees. Biagi is presently on the Ventnor City Board of Education, a position he has held for nearly 10 years. Through the course of his more than 30 years in law enforcement, Chief Biagi has received numerous commendations and awards, including the New Jersey State PBA award for Heroism.

Biagi's education includes a dual Bachelor of Arts Degree in Criminal Justice and Psychology from Stockton State College, where he graduated in 1988. He continues to work towards his Master’s Degree in criminal Justice from St. Joseph's University. Chief Biagi is a current member of the PBA Local #97 and has served as President, Recording Secretary as well as on the Executive Board. Biagi is also an avid martial artist obtaining his 2nd degree Black Belt in Tae Kwon Do from the Ninja Karate Academy.